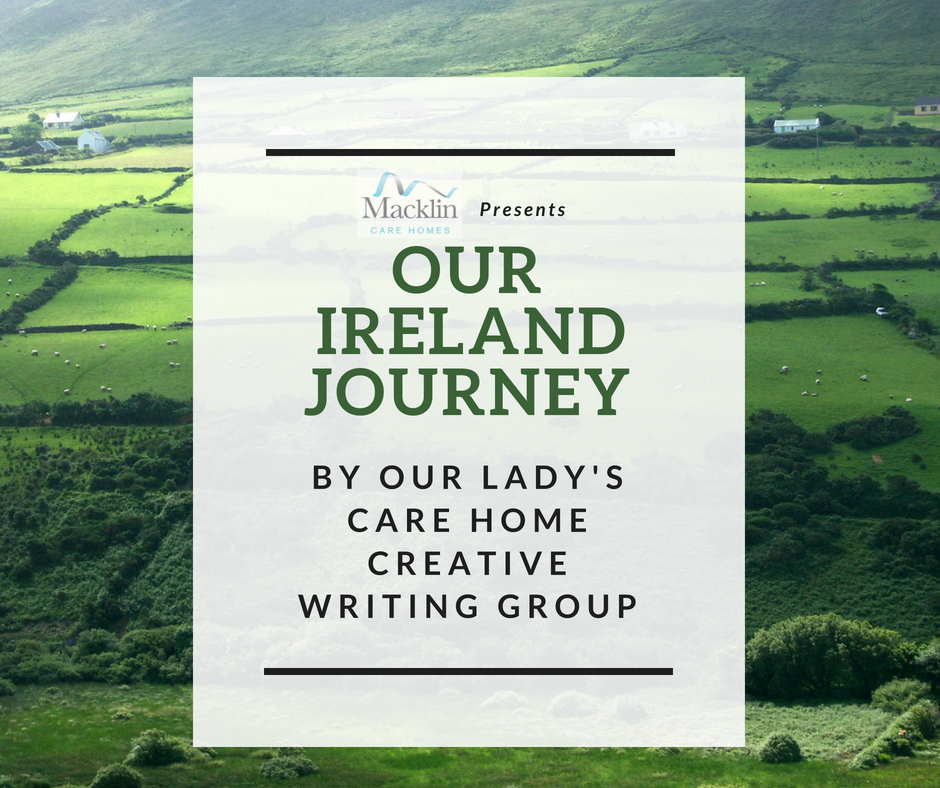 This poem was put together by our residents in the creative writing group at Our Lady's Care Home, we are extremley proud of the groups collective approach and the final outcome. Who knows, we could have the next Seamus Heaney in our Belfast Home!

We’ll start in Belfast where six were born

And see the watching giants, one, two three

Past Portrush, Portstewart and Antrim’s glens

Onward to Derry with its ancient walls

Its Bogside and Waterside joined by a bridge.

Where waves crash and boom onto the cliffs

And head past the church of St. Colm the dove

On to Creeslough and through it in a blink.

Next Kathleen’s Killybegs where happy holidays were spent.

At Bundoran we’re almost in Sligo

Where Yeats lies asleep under Benbulben

So we cast a cold eye and then pass by.

On down to Mayo and the Quiet Man

With Croagh Patrick’s triangle against the sky.

With their soft Western air, their empty sands.

Onward we fly to Galway City

We see the River Corrib and the salmon run

From its bridge before we move to Clare

With its may flowers and its flaggy shore.

Down past the Cliffs of Moher and Spanish Point

We call at Lisdoonvarna to hear the music play

Then briefly touch on Limerick before we take the boat

And cross the banks of Shannon to Kerry’s mountains fair.

And in Dingle there’s a famous one who lives in the bay.

There’s the Blaskett’s and Valentia, islands we admire

Where we’ll eat the special pudding before setting out again.

In Waterford we gaze upon green fields and hedges high

Which took so many starving folk to lands away from home.

In Wicklow, nestled between two lakes, we view Glendalough

The great monastic site of the island of saints and scholars

With its tower standing tall for a thousand years.

To Dublin now and here we rest, while others rush around us.

We sit by the side of Liffey, wander down Grafton Street

Take in a play at the Abbey and visit the Book of Kells.

Onward now to Drogheda and the famous Boyne ,

Then Carlingford’s ancient castle on the Lough.

Close now to where we come from, we promenade

At Newcastle and hear the waves rush shorewards.

We’re back in sight of giant yellow cranes

And well known view of towers tall and twin